Cards for a Cure 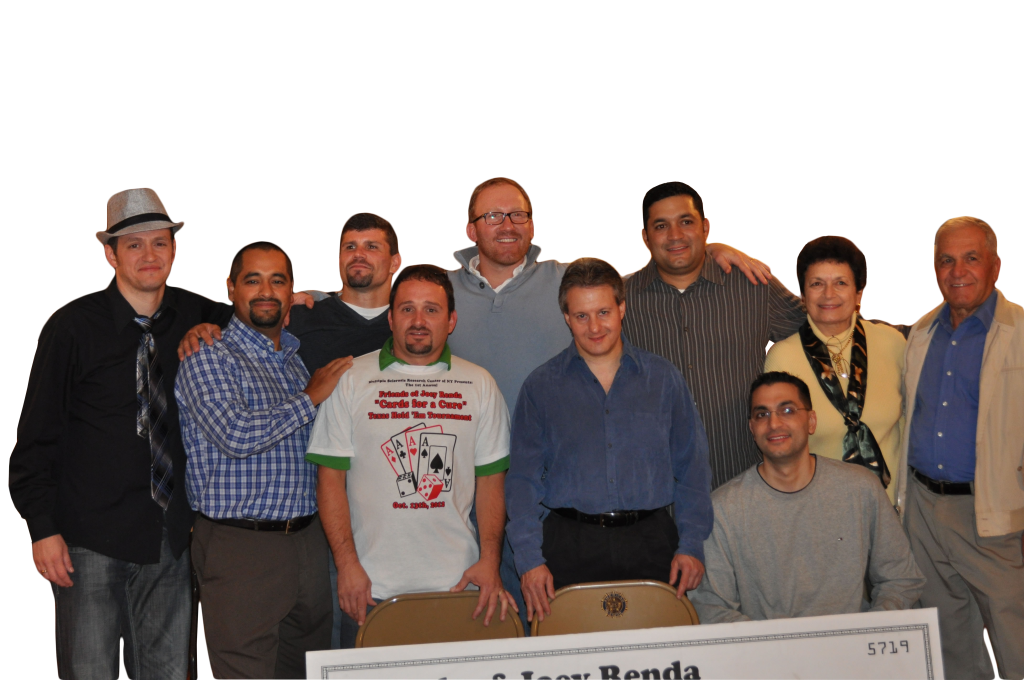 8 years ago, a set of former Hunterdon Central High School Graduates set out to make a difference by organizing an event in the name of Joseph Renda, who was diagnosed with MS in 2004.  Their idea was to create an annual poker tournament called the “Friends of Joey Renda: Cards for a Cure” tournament and they picked the Tisch MS Research Center as the place where 100% of the donated money would go to.

My name is Joe Renda and I want to share with you my life experiences since 1999.

My senior year of college at Penn State started just like the previous years, excited to see my roommates and friends while looking forward to getting one step closer to graduating.   However, after a few weeks I started feeling significant physical discomfort in my abominable area, which included severe stomach pains, cramps and weakness that didn’t seem to go away.  At times, I remember sitting in class and feeling as if someone inside me was using a razor blade to carve up my abdomen, which was immediately followed by the urge to find the nearest men’s room right away.  After I was sure it wasn’t the typical flu symptoms I had experienced before, I decided to see a doctor.  Within one week of the appointment, I was officially diagnosed with ulcerative colitis in October of 1999 and prescribed a list of medications to treat the illness.  I finished my senior year at Penn State and graduated in December of 2000 with a BS in Biochemistry and Molecular Biology.

Living as an energetic twenty-one year old with ulcerative colitis was not exactly easy, as anyone with the illness will tell you.  The first thing we look for when going anywhere is the nearest bathroom because I know eventually, I will need it.  That included all places, bars, nightclubs, meeting rooms for work etc.

In January of 2001, I was hired by Aventis Pasteur Biologics to work in various positions in Vaccine Manufacturing over a two year period in a rotational program.  Within a few months, I started feeling numbness in my fingertips and toes, along with experiencing periods of double and blurred vision.  After being falsely diagnosed with a Vitamin D deficiency by a general practitioner, I was finally referred to see a neurologist.  After consulting with a few doctors and having a multitude of tests and examinations, I was diagnosed with Multiple Sclerosis (MS) in October of 2001.  I remember the neurologist walking in the room and saying “well, you now have another autoimmune illness,” as if he had just given me a gift.  I cried the entire ride home and at one point, I actually pulled into a store parking lot because I could tell I wasn’t paying much attention to my driving.  I needed to get all the grief of being diagnosed with two chronic, life changing illness by the age of twenty-three out of my system because I knew I would need my strength when I have to break the news to my family.

My mom took the news similar to what I had pictured in my mind; crying and hugging me, saying it isn’t fair and if she could she would gladly take this illness as her own.  My dad was obviously disappointed but said “well, this is something we have to deal with.”  Looking back, I now realize how caring and supportive it was that he used the word “we” rather than “you,” even though in the end I would ultimately carrying the burden.

After being diagnosed with MS just two years after ulcerative colitis, I accepted the fact that I must attempt to maintain a positive attitude and outlook on the future, no matter what symptoms may arise.

Within a year of diagnosis, I had lost the ability to run, since the muscles in my legs felt slightly tighter and uncoordinated than usual, and by the second year, I began experiencing blurred vision.  The symptoms got worse each month to the point where I was unable to read hard copy and computer documents.  At that point, my vision was past the threshold of being legally blind, rendering me unable to perform the duties of my job and I had no choice but to go on short-term disability with the company.

In August of 2004, I suffered a severe MS flare-up, which worsened all of the symptoms I was suffering from, especially spasticity (tightness) and weakness in my legs.  Walking was extremely difficult and now the chronic pain was unbearable in my lower back, legs and feet.  In December of 2004, I decided to find another neurologist and starting seeing Dr. Sylvester at the Tisch MS Research Center of New York.  Dr. Sylvester has treated me since December of 2004 prescribing various medications, treatments and physical therapists to help me cope with the various symptoms.

After a routine check up performed by my gastroenterologist to monitor ulcerative colitis in August of 2011, I was diagnosed with colon cancer.  The diagnosis required a colectomy to remove almost the entire large intestine, along with a period of eight days to recover.  A few weeks after the surgery I was notified that the cancer had progressed to Stage III status in my lymph nodes; requiring twelve rounds of chemotherapy over a six month period.    After allowing a month to recover from my last round of chemo, I was readmitted to the hospital to have a second surgery; this time to reconnect my small intestine to the last remaining small section of my large intestine (called the reversal surgery).  This procedure was scheduled to be for 4 days; however, I was there for a total of 22 days due to complications most likely caused by MS.

While I was completing a chemotherapy treatment and preparing for the second surgery in June of 2012, my brother Vince and his group of friends were organizing a Texas Hold ‘Em Poker Tournament Charity Event to raise money for stem cell research being performed at the Tisch International Multiple Sclerosis Research Center of New York.  The event has raised an incredible amount of money to support the MS Center’s Stem Cell Clinical Trial.  Along with nineteen other patients, I was chosen to participate in the groundbreaking clinical trial, which is the first in the world to use stem cells to reverse the damage caused by MS, set to commence in 2014.

The effects of cancer, 2 major surgeries, a total of 30 days in the hospital, and six months of chemo caused a tremendous physical challenge for rehabilitating my body.  Keep in mind, most cancer patients aren’t already battling a completely separate debilitating, chronic illness which already causes physical pain and discomfort.  The weakness in my legs required continued daily physical therapy just to get around with the use of a cane.  Because of chemotherapy, I was unable to exercise due to side effects which included fatigue and nausea, along with spending twenty-two days recovering in the hospital from the surgery complications.  After a few months of extremely hard work and physical therapy, I regained a majority of my strength; however the spasticity had worsened and I now have to use a walker to get around both in and outside my home.

The events described above leads us up to the present, which includes the following:

So this is my story that I wanted to share with you, this is my fight that I have been battling for 15 years.   I will continue to fight every minute of every day and in the meantime hope to show others who have their own struggles in life, whatever they may be, to never give up.

I am asking you for your help in raising money for what is the latest in groundbreaking medical care that can help the hundreds of thousands of people who suffer from MS every day.  Join us for a night of food, fun and poker at the Friends of Joey Renda Poker Tournament.  If you cannot make it, please consider a donation online at http://friendsofjoeyrenda.com/.  We are a fully registered public charity and all donations are tax deductible.  Thank you for taking the time to read my story and I look forward to what we can accomplish together!